“I have no one to earn money for the family now” Answer for death of World Cup Worker still awaits.

The biggest sporting event on Earth ? No doubtly is World Cup. Event which happens every 4 year is anticipated as the biggest FIFA tournament. World Cup 2018 Russia, Widely regarded as one of the most entertaining World Cups ever held, thanks to sensational goals, dramatic last-gasp victories and controversies aplenty, it was a tournament which provided many unforgettable moments. Next World Cup is set to happen at Qatar 2022 and is facing a deadly construction process unlike any other before.

Nepali Worker, Tej Narayan Tharu 23, died in August when he fell from a walkway at Al-Wakrah stadium, which was being built for the 2022 World Cup.

He had his mother Sita, wife, Renuka Chaudhary and a four-year-old daughter, Sadikshya as his family. Renuka, used to speak with her husband by phone every 2-3 days until the day she received a phone call from Qatar informing the her husband had fallen down while working. After doing a lot of calls and digging, she found out her husband had actually died. Renuka, wailed in despair, collapsed and was carried away.

Despite of the grief, Renuka took calls from Qatar and Manar General Contracting, the company which employed her husband and the supreme committee for delivery and lagacy, the body organizing the World Cup.

“We are investigating the death and will inform as soon as poosible” said the man from the supreme committee.

“He fell off from the walkway … It’s usually considered safe. But people from another company had removed a [floor] plate, creating a gap. He failed to see it and fell through it,” Source.

One of the blocks joining the passage was taken without informing workers … creating a gap … Since Tharu was carrying a [board], he couldn’t see it and fell from there.” Source.

The committee organizing Qatar 2022 conducted an investigation into his death at the £512m Al-Wakrah
stadium and said lessons had been learned and “corrective measures implemented”. Three months later, Renuka is still waiting for an official answer.

Renuka says she fears for her four-year-old daughter Sadishya’s future.

Tej Narayan Tharu’s family are still waiting for compensation. Tharu’s former employers say compensation
has not yet been released to the family as the case is still in the courts.

Tej Narayan Tharu’s family cremated him by the banks of the Budhi river in Itahari, Nepal. His wife, Renuka Chaudhary, wailed in despair. She circled the red coffin before tossing mustard seeds and barley on to the pyre to purify it and flamed her husband’s body.

The cause of all these deaths can be traced back to FIFA’s corrupt executives. Owners pocketed hundreds of millions of dollars of bribes to insure that Qatar would host the 2022 tournament. The International Trade Union Confederation projects that 4,000 workers will die in Qatar by the time 2022 arrives. The current number is an estimated 1,200 deaths. 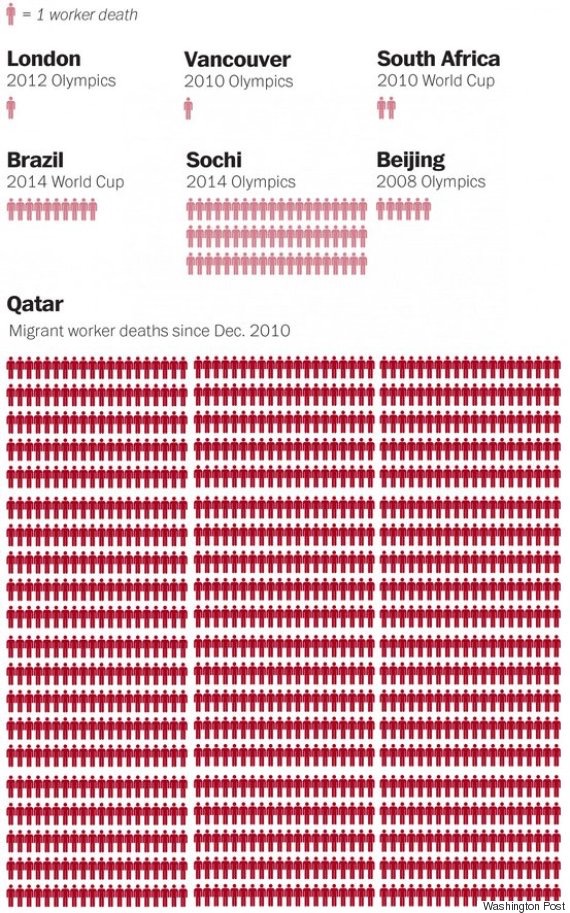 But the number is not as extreme as it sounds. A large portion of these deaths involve construction away from World Cup facilities, and considering the population of migrant flow through the country, the number is based off a larger scale than others.

Qatar needs to introduce more and more improvements to their construction process to protect any reputation they have left.